How to make maps with Census data in R

The US Census collects a number of demographic measures and publishes aggregate data through its website. There are several ways to use Census data in R, from the Census API to the USCensus2010 package. If you are interested in geopolitical data in the US, I recommend exploring both these options - the Census API requires a key for each person who uses it, and the package requires downloading a very large dataset. The setups for both require some effort, but once that effort is done you don’t have to do it again.

The acs package in R allows you to access the Census API easily. I highly recommend checking it out, and that’s the method we will use here. Note that I’ve already defined the variable api_key - if you are trying to run this code you will need to first run something like api_key <- <enter your Census API key> before running the rest of this code.

For purposes here, we will use the toy example of plotting median household income by county for every county in South Carolina. First, we obtain the Census data. The first command gives us the table and variable names of what we want. I then use that table number in the acs.fetch command to get the variable I want.

If you have the maps and ggplot2 packages, you already have the data you need to plot. We use the map_data function from ggplot2 to pull in county shape data for South Carolina. (A previous attempt at this blogpost had used the ggmap package, but there is an incompatibility between that and the latest ggplot2 package at the time of this writing.) 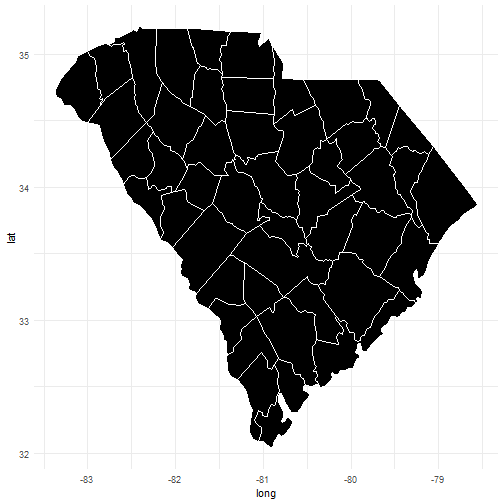 Merging the demographic and map data

Now we have the demographic data and the map, but merging the two will take a little effort. The reason is that the map data gives a lower case representation of the county and calls it a “subregion”, while the Census data returns the county as “xxxx County, South Carolina”. I use the dplyr and stringr packages (for str_replace) to make short work of this merge.

It’s now a simple matter to plot this merged dataset. In fact, we only have to tweak a few things from the first time we plotted the map data. 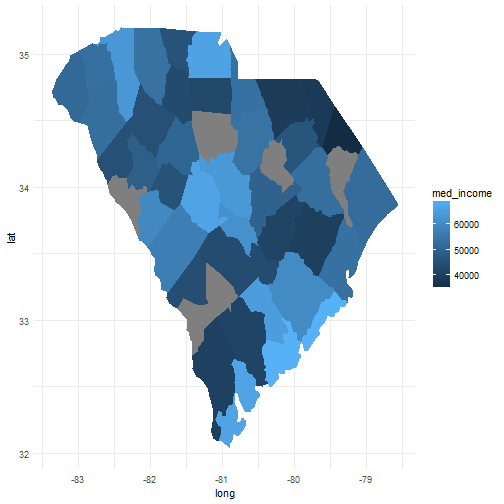 It’s pretty easy to plot U.S. Census data on a map. The real power of Census data comes not just from plotting it, but combining with other geographically-based data (such as crime). The acs package in R makes it easy to obtain Census data, which can then be merged with other data using packages such as dplyr and stringr and then plotted with ggplot2. Hopefully the authors of the ggmap and ggplot2 packages can work out their incompatibilities so that the above maps can be created using the Google API map or open street maps.

It should be noted that while I obtained county-level information, aggregate data can be obtained at Census block and tract levels as well, if you are looking to do some sort of localized analysis.