Though not about Greenville especially, it might be interesting to quantitatively analyze inauguration speeches. This analysis will be done using two paradigms: the tm package and the tidytext package. We will read the speeches in such a way that we use the tidytext package; later on we will use some tools from that package to make analyses traditionally done by tm.

I looked around for inauguration speeches, and finally found them at www.bartelby.com. They are in a format more for human consumption, but with the use of the rvest (harvest?) package, we can read them in relatively easily. However, we need to do a mapping from speech IDs to speakers (newly inaugurated presidents), which is a little ugly and tedious.

Now that we have the speeches as a one-record-per-speech data frame, we can start to analyze them. This post will consist really of a basic analysis based on the “bag of words” paradigm. There are more sophisticated analyses that can be done, but even the basics can be interesting. First, we do a bit of data munging to create a one-record-per-word-per-speech dataset. The strategy is based on the tidy text paradigm described here. Once we have the dataset in the format we want, we can easily eliminate “uninteresting” words by using a filtering anti-join from the dplyr package. (Note: there may be analyses where you would want to keep these so-called “stop-words”, e.g. “a” and “the”, but for purposes here we just get rid of them.)

We can now plot the most common words in inauguration speech, just to dig into what that dataset looks like. Note that I polished this graph up a bit (changing axis labels to something pretty, rotating x-axis labels, etc.), but the first past through this graph was a bit ugly. To me, the two most important elements of this graph are selecting the 20 most common words and re-ordering from most to fewest. 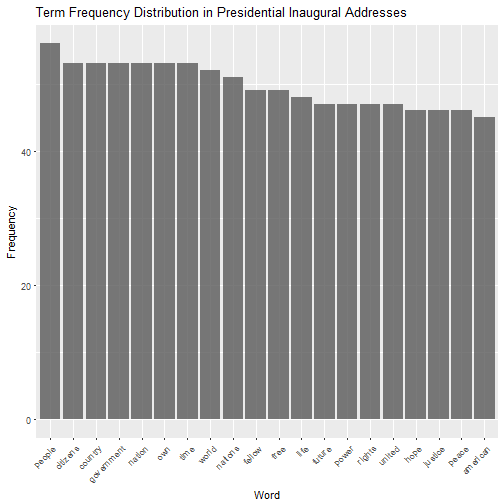 At least using the bag-of-words paradigm, the term-frequency * inverse-document-frequency (TF-IDF) analysis is used to determine what words set speeches (or other documents) apart from each other. A word in a given document has a high TF-IDF score if it appears very often in that speech, but rarely in others. If a word appears less frequently in a speech, or appears more often in other speeches, that will lower the TF-IDF score. Thus, a word with a high TF-IDF score can be considered a signature word for a speech Using this strategy for all interesting words, we can compare styles of speeches, and even cluster them into groups.

First, we use the bind_tf_idf function from tidytext to calculate the TF-IDF score. Then we can find the words with the highest TF-IDF score - the words that do the most to distinguish one inauguration speech from another. 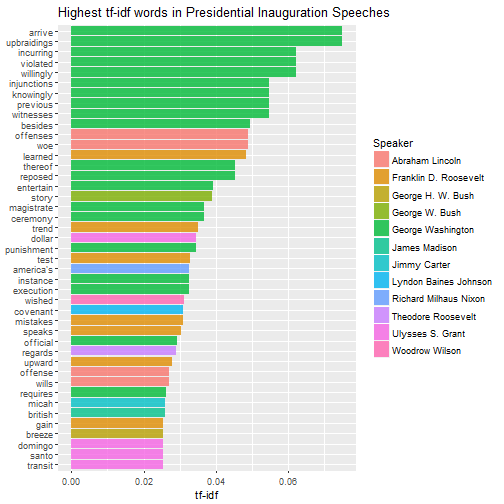 Then we can do this analysis within each speech to find out what distinguishes them from other speeches. The for loop below can be used to print multiple pages of faceted graphs, good for when you are using RStudio or the R gui to explore. 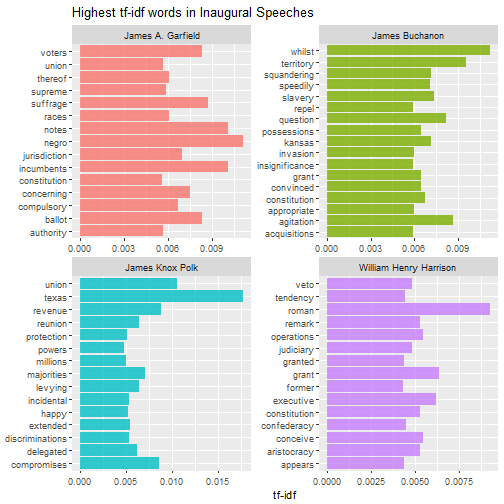 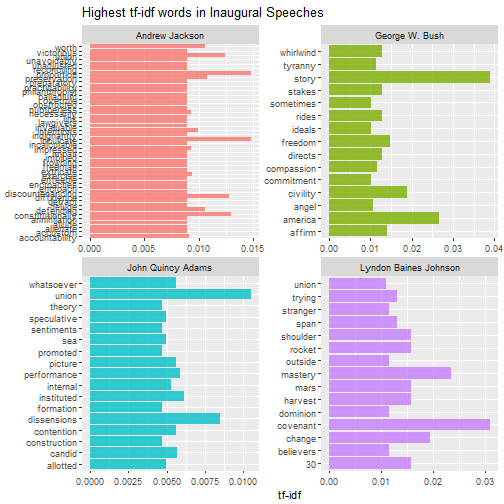 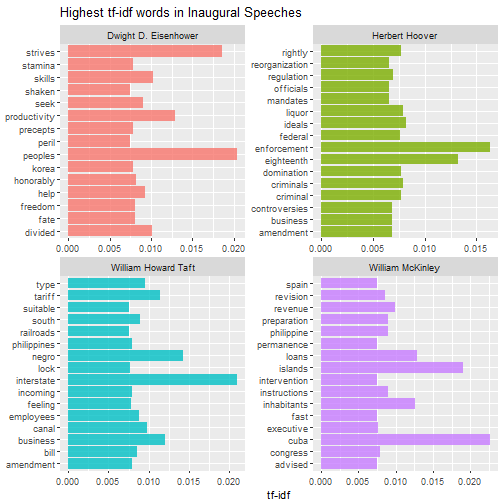 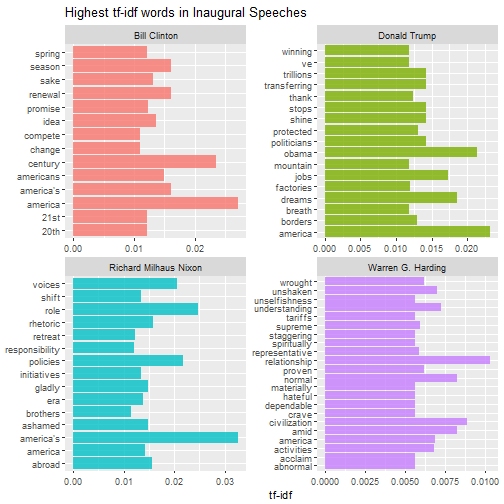 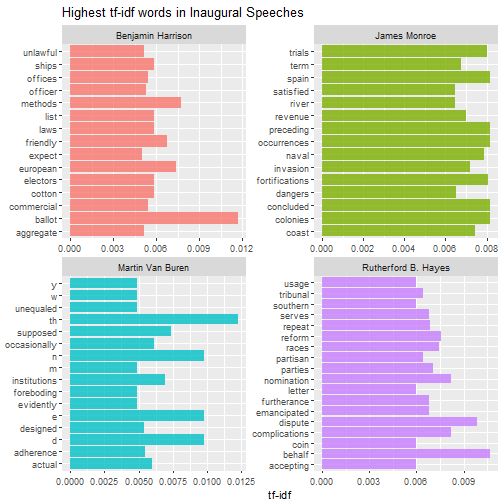 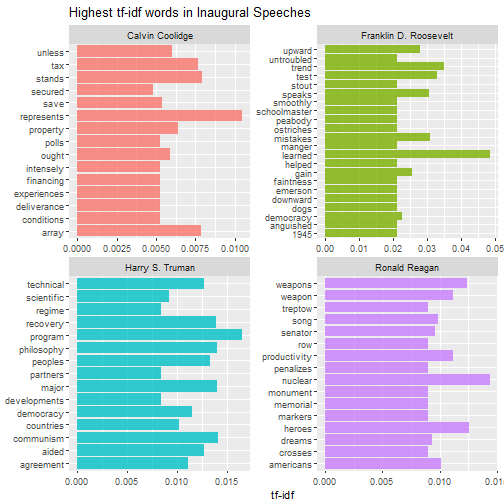 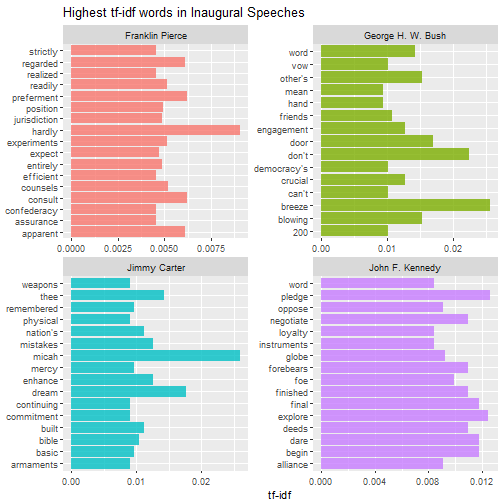 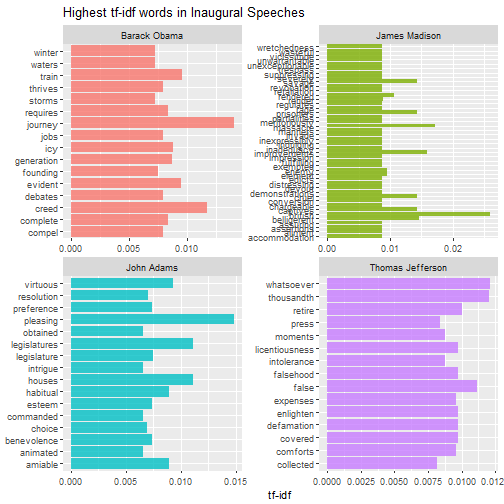 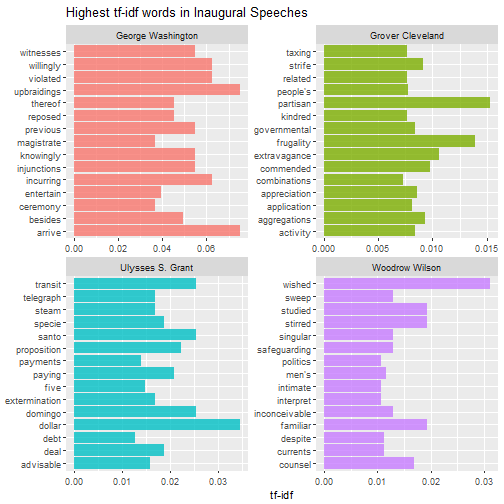 There’s a lot more that can be done here, but we’ll move on to clustering these inauguration speeches. This will require the use of the document-term matrix, which is a matrix that has documents in the rows, words in the columns, and entries that represent the frequency within the row’s document of the column’s term. The tidytext packages uses the cast_dtm function to create the document-term matrix, and the output can then be used by the tm package and other R commands for analysis.

To show the hierarchical clustering analysis, we can simply compute a distance matrix, which can be fed into hclust: 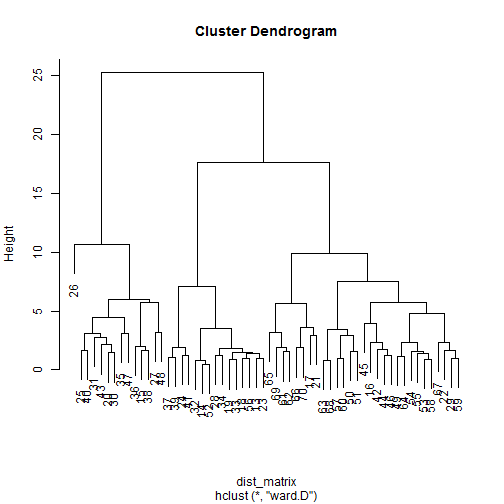 It’s pretty interesting that Speech 26 is unlike nearly all the others. This was William Henry Harrison discussing something about the Roman aristocracy, something other presidents have not felt the need to do very much.

Let’s say we want to break these speeches into a given number of clusters. We can use the k-means approach.

Membership of speeches in clusters is here:

It’s interesting to note that all of the speeches since Hoover (i.e. 49 through 70) have either been either in category 1 or 5, with the latest ones being in Cluster 1 (this includes Reagan, Bush, Clinton, Bush, Obama, and Trump). Nearly all speeches discuss the relationship between government and its people (as you would expect from an inauguration speech), but Cluster 5 seems to put more emphasis on people, and Cluster 1 on government. Hmmm…

Of course, you can probably get something different with fewer clusters, and you can use the hierarchical clustering analysis above to justify a different number of clusters.

We return to the bag-of-words tidytext paradigm to do a sentiment analysis. The sentiment analysis we do here is very simple (perhaps oversimplified), and tidytext supports more sophisticated analysis. But this is a start. We start by going back to the one-record-per-speech data frame, and scoring words based on sentiment. We don’t worry about stop words at this point, because they will likely be scored as 0 anyway. We use the Bing sentiment list, which basically scores words as positive or negative (or nothing). We assign a score that basically gives a +1 to positive and -1 to negative. Then we add up the score column, and divide by the number of words in the speech. (Which is why we did not eliminate stop words here.) This gives a sort of average positivity/negativity score per word in the speech. If the score is negative, there are more negative words in the speech than positive. If the score is positive, there are more positive words. The higher the absolute value of the score, the higher the imbalance in positive/negative words. Similarly, we just count the number of sentiment words (whether positive or negative) to get an idea of the emotional content of the speech. (Note: this is a preliminary analysis. This does not distinguish between, say, “good” and “not good”. So take any individual results with a grain of salt and dig deeper.)

This analysis of inauguration speeches comes at a time where the change of US presidential power has a different feel, even the inauguration speech. The preliminary analysis above shows that Trump’s speech was similar in topics to speeches for the last 40 or so years, and nothing notable in its emotional content.

This first start revealed a few interesting patterns, but a more sophisticated analysis might reveal something further.